In case you missed the announcement at the start of our last episode, with Neon Yang, my new game, All Our Yesterdays, is available now for pay-what-you-want on my itch!

This time around, it’s my absolute pleasure to welcome to the show Aimee Kuzenski (@aimeekuzenski)! Aimee reads to us from her novel, Tilted, which leads us into a great discussion on the interiority of writing, thoughts about reading aloud, and how important a good fight scene is.

The Lord of the Rings, by J.R.R. Tolkien

The Murderbot Diaries, by Martha Wells

The Raven Tower, by Ann Leckie

The Hobbit, by J.R.R. Tolkien

“The Shadow out of Time”, by racist uncle Howard

Beneath the Rising series, by Premee Mohamed

“How I Became Coruscating Queen of All the Realms, Pierced the Obsidian Night, Destroyed a Legendary Sword, and Saved My Heart’s True Love,” by Baker and Dovey

No Shit, There I Was, edited by Alex Acks

Skies of Wonder, Skies of Danger, edited by Agner, Appel, and Miles

“The Raven,” by Edgar Allan Poe

Sense and Sensibility, by Jane Austen

What Moves the Dead, by T. Kingfisher

The Fall of the House of Usher, by Edgar Allan Poe

As mentioned at the top of the show, I have a game out, All Our Yesterdays, which you can find on my Itch.io!

It’s my absolute pleasure, this time around, to welcome Neon Yang to the show to talk about their brand new book, The Genesis of Misery, out September 27th, 2022, from Tor books! Neon reads to us from the start of the book, which leads us into some great discussion about why doing multiple rewrites can be good, actually.

Friends at the Table PARTIZAN

Join us next time, when my guest will be Aimee Kuzenski!

This time around, we’re joined once again by Rem Wigmore (@faewriter), who brings us a delicious excerpt from their trunked novella, Considine’s Counsel, which leads us into a great conversation about the study of story forms, actual play podcasts, and an opportunity, as if we needed one, to just be 110% on our bullshit.

Foxhunt and Wolfpack, by Rem Wigmore

The Lord of the Rings, by J.R.R. Tolkien

The Hobbit, by J.R.R. Tolkien

And What Can We Offer You Tonight By Premee Mohamed

River of Teeth, Taste of Marrow, and Upright Women Wanted, by Sarah Gailey

The Tensorate series, by Neon Yang

The Murderbot Diaries, by Martha Wells

The Blacktongue Thief, by Christopher Buehlman

Eat the Rich, by Sarah Gailey

The Girl and the Sea, by Molly Knox Ostertag

Escape from the Blood Keep

Stick around next month, when my guests will be Neon Yang and Aimee Kuzenski!

This time around, I’m very pleased to welcome back one of my guests from this show’s very first season, Valerie Valdes (@valerievaldes), to talk about the conclusion of her Chilling Effect trilogy, Fault Tolerance, which just released this Tuesday, August 2nd, 2022! Val reads to us from the opening chapter, which leads us into a lively discussion of video game tropes, fanfic, screenwriting, and who Val mains in Super Smash Bros.

The NeoG series, by K.B. Wagers

The Machineries of Empire, by Yoon Ha Lee

Five plus one fic

Blades in the Dark

Stone the Crows, by Grant Howitt

Friends at the Table Partizan

Join us again next time, when Rem Wigmore will be returning to the show!

This time around, we’re joined by the one and only Miri Baker (@MiriBaker). Miri brings us a trunked story from ye olden days, all the way back in 2011, plus a lot of great conversation about the load-bearing parts of our personalities, cosplay, and how genuinely liking the things we like is good, actually.

This episode’s reading carries content warnings for blood, extremely unsafe handling of swords, and extremely incorrect understanding of swords. It is just under 20 minutes long.

Things we mention on this episode:

Blue at War, the cape Miri made for Amal El-Mohtar for the 2020 Hugos

Machine of Death and This Is How You Die, edited by Ryan North, Matthew Bennardo, and David Malki

The Importance of Being Earnest, by Oscar Wilde

In Other Lands, by Sarah Rees Brennan

River of Teeth, by Sarah Gailey

Archive of our Own

Nona the Ninth, by Tamsyn Muir

This is How You Lose the Time War, by Amal El-Mohtar and Max Gladstone

Stick around next month for the return of Valeria Valdes and Rem Wigmore!

This time around, it’s my pleasure to welcome Ruthanna Emrys (@R_Emrys), who joins us to talk about her new novel, A Half-Built Garden, which comes out on July 26th from Tor Dot Com publishing. We talk about ecological sci-fi, the things that got left on the cutting-room floor, and Ruthanna’s current reads.

Field Guide to Invasive Species of Minnesota, by Amelia Gorman

Reading the Weird on Tor.com

The City We Became, by N.K. Jemisin

Tune in next time, when my guest will be Miri Baker!

This time around, it’s my delight to be the first podcast out there to host up-and-coming author Amanda Cook (@AmandaCook627)! Amanda reads her trunked story, “Snow Day,” which leads us into a delightful conversation about cozy fiction, early-career writing, cosplay, and patience!
This episode’s reading carries content notices for some brief mentions of guns and other weapons, along with a mention of nuclear war.
Things we mention in this episode:
Book Tour 17: Sarah Gailey - Just Like Home
Dealing with Dragons, by Patricia C. Wrede
“Badass Moms in the Zombie Apocalypse,” by Rae Carson
John Wiswell
Wyngraf
Tales & Feathers Magazine
Augur
4th Street Fantasy
“Ruby’s Delivery,” by Amanda Cook
The Submission Grinder
Etherea Magazine
NaNoWriMo
The Golden Orb, by Amanda Cook
Tor
When We Were Forgotten, by Amanda Cook
Moiraine Damodred (from The Wheel of Time, not GoT)
Frozen
Once Upon a Time
Gen Con
Crowley
David Tennant
“Weaving Serenity,” by Amanda Cook
“Lily and Ink,” by Amanda Cook
Apparition Lit
Our Flag Means Death
The Kids in the Hall
Hell’s Library series, by A.J. Hackwith
Sweep of Stars, by Maurice Broaddus
Black Panther
The Expanse
Amanda’s insta, Facebook, and blog
Tune in next month, when my guests will be Ruthana Emrys and Miri Baker!
Share | Download(Loading)

This episode carries content warnings for mentions of parental death, terminal illness, serial killers, and feelings of powerlessness. Additionally, the reading from this episode contains an overall sense of tension and dread. If you would like to skip the reading, you can skip forward 18 minutes from the beginning of the reading to bypass it.

This time around, we’re joined once again by the incomparable Sarah Gailey (@gaileyfrey) to talk about their incredible (and incredibly terrifying) new book, Just Like Home, available July 19th wherever fine books are sold! Sarah tells us about the staggering number of rewrites that this book went through and what was learned along the way.

Things we mention this episode:

The Luminous Dead, by Caitlin Starling

Flowers for the Sea, by Zin E. Rocklyn

Magic for Liars, by Sarah Gailey

And then a skeleton popped out

The Death of Jane Lawrence, by Caitlin Starling

Eat the Rich, by Sarah Gailey and Pius Bak

The Echo Wife, by Sarah Gailey

“The Foundations of Decay,” by My Chemical Romance

Number One Fan, by Meg Elison

Empire of the Wild, by Cherie Dimaline

Join us in two weeks, when my guest will be Amanda Cook!

Update: I've fixed some issues with the audio mixing for this episode that should make it easier to listen to now.

This time around, it’s my absolute joy to welcome Michael R. Underwood (@MikeRUnderwood) to the show! Mike reads from his trunked novel, The Broken Summit before (and after) we have a conversation about the intersection of writing and tabletop roleplaying, the life of a content creator, and some excellent advice about shaping your career goals.

This episode’s reading is 17 minutes long and carries content warnings for themes of war and imperialism.

Things we mention on this episode:

River of Teeth, Taste of Marrow, and Magic for Liars, by Sarah Gailey

Monster of the Week

Dogs in the Vineyard

Blades in the Dark

Powered by the Apocalypse

Dear Writer, You Need to Quit, by Becca Syme

The Many Half-Lived Lives of Sam Sylvester, by Maya MacGregor

Join us again next month, when my guests will be Sarah Gailey and Amanda Cook!

This time around, we're joined by author Marion Deeds (@mariond_d) to talk about her new novella, Comeuppance Served Cold, a wonderful alternate-history fantasy-noir out now from Tor.com publishing. Marion talks about baking versus cooking when working on books, and we muse on the current golden age of SFFH novellas.

Things we mention this episode: 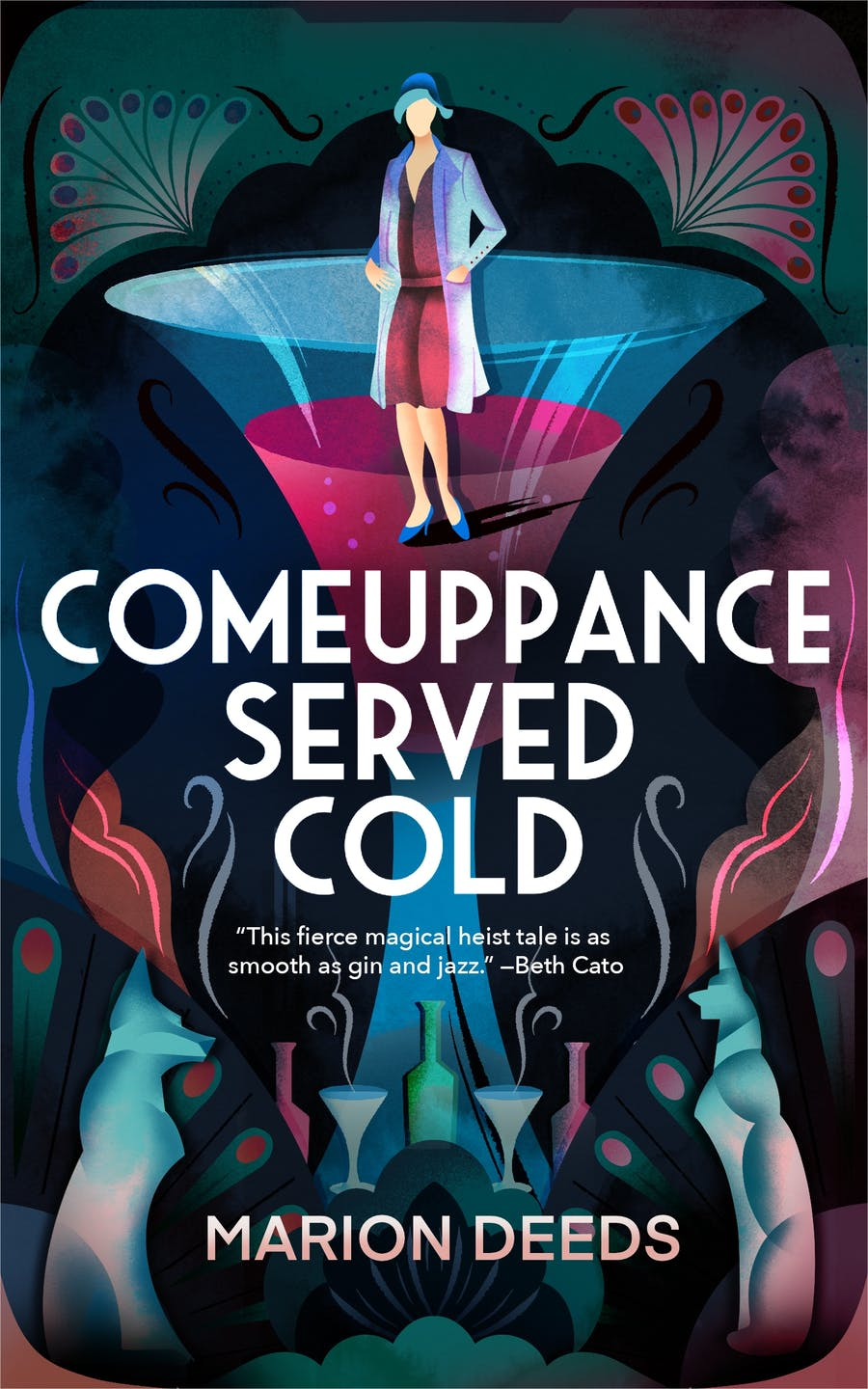 The Poppy War, by R.F. Kuang

Victories Greater Than Death and Dreams Bigger Than Heartbreak, by Charlie Jane Anders

Our Opinions Are Correct